The Silver Marketing Effectiveness Award was presented to REX in the B2B Integrated Campaign category for their work on DermaSpark’s OxyGeneo® 3-in-1 Super Facial brand. REX won their Platinum Marketing Effectiveness Award in the category of Rebrand/Redesign for their work with DermaSpark’s Dermaroller® Micro-Needling campaign.

“As a small business in Coquitlam, we are thrilled to represent the community and to be internationally recognized for our achievements,” Allison Bran, founder of REX, explains. “These awards are a wonderful acknowledgment of our team’s dedication and brilliance; I’m very proud! But, at the same time, we share the win with DermaSpark. They create tremendous value for their clients and they represent superior technology so, in many ways, they make our job easier. We are honoured to work with them,” Bran says. 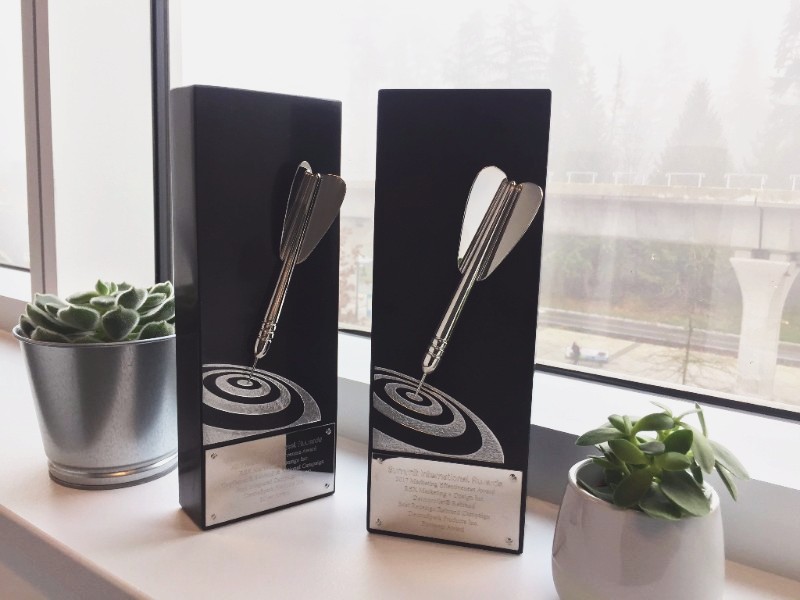 Bran describes the challenges and objectives of both the OxyGeneo and Dermaroller national campaigns: “When we began, the products and treatments were severely lacking differentiating messages, strong imagery, and branding in the heavily saturated Canadian medi-aesthetics market. We developed an entirely new platform for both products, including a new name, slogan, visual identity, and brand positioning to make OxyGeneo and Dermaroller worldwide brands and leading competitors”.

”In branding the OxyGeneo, we called it the 3-in-1 Super Facial. This is something that the REX Marketing team conceived,” says Moshe Ben-Shlomo, founder of DermaSpark, the exclusive Canadian distributor of the OxyGeneo and Dermaroller medical-aesthetic devices. “REX Marketing created the entire brand platform for the OxyGeneo, that has now been adopted by every distributor around the world because of the success we’ve had here in Canada”, Ben-Shlomo says. “With that success, naturally, we partnered with REX when it came time to brand the Dermaroller and we are experiencing even faster sales this time around.”

“In developing the marketing platform for the OxyGeneo and Dermaroller, a top-down, bottom-up approach to market penetration promoted device sales to professionals while promoting treatments to consumers,” Bran explains, “thereby building reciprocal demand within the primary and secondary audiences. Both devices feature highly sophisticated technology rooted in science, so messaging had to offer simple understanding to consumers and aestheticians without diminishing credibility with medi-aesthetic doctors. We know we have found the balance because it’s working.”

“Fast forward to 2016 and 2017,” Ben-Shlomo continues, “the OxyGeneo is the most popular facial treatment in Canada. We have sold more machines in Canada than have been sold anywhere in the world, including the US. We have more treatments per machine in Canada than any other place in the world. So the question is: the same machine goes all over the world, but why is it so successful in Canada? REX is the answer.”

About the Marketing Effectiveness Award

The Summit Marketing Effectiveness Award responds to a common need in the marketing and advertising sector: to acknowledge the contribution of results and messaging, and the achievement of the marketer’s business goals. During the 2017 event, judges analyzed submissions and selected only 6% to receive the top spots. A truly international competition, the Summit Marketing Effectiveness Award received submissions from the following thirteen countries including Australia, Canada, Denmark, England, Germany, India, Nigeria, Singapore, Republic of Korea, South Africa, Turkey, United Arab Emirates, and the United States.

“Marrying creativity and effectiveness can be a difficult task, so winning a Summit MEA is a significant achievement.” Said Jocelyn Luciano, Executive Director for the Summit Awards. “The combination of experienced judges and our tough criteria ensures that only deserving submissions receive Summit MEA recognition.”

The Summit Awards organization is dedicated to furthering excellence in the communications industry. It administers three distinguished award competitions throughout the year with the goal of raising the awareness of companies and individuals who have the creative and marketing talent to go beyond the ordinary. Additional information about the Summit International Awards and its programs is available at www.summitawards.com.

Ready to Start With REX?

REX Marketing + Design Inc. is a multi-award-winning agency established in 2006 that focuses on brand development, marketing strategy, and graphic design. REX has a mission to contribute to the trust economy by catapulting values-based purpose-driven businesses to success.