To celebrate, we are featuring Cultures Connected, the Employee Resource Group for ACPI team members at REX, with Q&A about their heritage. Read Alex’s responses below! 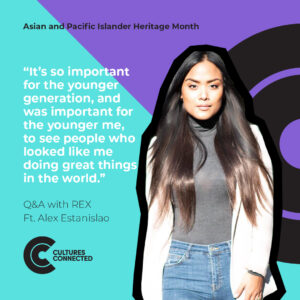 I’m a second-generation Filipina Canadian (she/her), born in Winnipeg, Manitoba. My parents and grandparents immigrated from Bataan Province and Cavite in the Philippines to Winnipeg a few years before I was born. I remember my early toddler years being raised by my grandparents, aunts and uncles, while my parents were at work. Our house was always busy, full of life, and lots of food. When I look back at home videos before I attended school, I didn’t speak a word of English! Tagalog was my first language since my grandparents, whom I was mainly raised by only spoke to me in Tagalog. It was only when I finished my first year of kindergarten when I started speaking English. While I may no longer be fluent, I’m grateful for my grandparents and parents who engrained in me my native language at a young age.

At age 6, my sister, parents, grandparents and I moved to Vancouver, BC. In the Filipino culture, grandparents play a large role in raising their grandchildren. In fact, in a Filipino household, it’s common to find three generations living together. Extended family also live close together, (my cousins and I never lived more than 5 minutes apart) and when it came to milestones, and celebrations, there was always a reason to come together, and if there wasn’t one, we made one. My fondest memories growing up were singing karaoke around the family room with my cousins, week-long Christmas celebrations with extended family and friends, and watching my grandma cook my favourite Filipino dishes after school.

During my formative years in high school, I found myself charmed by what I thought were the norms and standards I observed in my school. It wasn’t until after high school when I slowly began to fully embrace my Filipino heritage.

It was upon self-reflection that I realized that these behaviours and habits I developed in my high school years were because I was trying to imitate the environment around me. I grew up in a predominantly white suburb and high school, and I often remember feeling like I wanted to relate to my peers so bad, and in doing so I neglected who I was for a while. But, as I began to develop close relationships with other ACPI’s in my community I found a safe space to trade stories and relate in a way that made sense to me.

There’s so many that come to mind, Filipino traditions and celebrations in my family were largely appreciated and very dear to me. We have a rich fusion of influences and cultures, most of which were a result of previous colonization, deriving mainly from Spain.

Christmas: One of our most loved celebrations often lasting a week long. I remember families and relatives gathering on the 24th of December to celebrate with food prepared for “Noche Buena”, in Spanish, “midnight meal”.

Debut: When Filipinas reach 18 years of age, it becomes one of our major milestones in life. It signifies our step into adulthood. Debuts are events organized by the parents and consists of a lengthy evening program. From opening prayer, followed by a grand cotillion Waltz dance. Integral aspects of a debut include 18 roses (closest male friends) and 18 candles (closest female friends) followed by the “Father and Daughter Dance.”

Boodle Fight: Kamayan “by hand” is the traditional Filipino form of eating. It’s a communal-style Filipino feast, composed of a large spread of different Filipino dishes served on banana leaves and eaten without utensils. Kamayan is a way for families and friends to come together and share food.

Growing up, I looked up to a lot of my older cousins who paved the way for my younger cousins and me. Looking back as a young Filipina Canadian growing up in westernized culture, it meant a lot to my identity and development to see ACPI role models who looked like me in the media. I remember gushing every time I saw Melissa Reyes from Girlicious on T.V. I thought to myself, this girl looks like me, and she’s killing it!

To dive a little deeper, there are a few ACPI trailblazers that I’ve been honoured to learn about.

She once said in an interview “don’t be afraid to pursue top leadership posts in any field. Gender should never be a hindrance nor a reason for being selected to the top post. Women shouldn’t be guilty of pursuing careers just as men shouldn’t be embarrassed about doing household chores. More women will be empowered; more glass ceilings will be broken.”

Whang Od: One of the oldest living traditional mambabatok artist in the world. I remember learning about her and being in awe of her work so ingrained in tradition growing up. She’s part of the But But Kalinga tribe, where tattoos represented who they were and where they came from.

At 104 years old, she’s passed down Batok tradition to her nieces. Her tattoos come with variations in designs, some meaning strength, fertility, and her world-famous three dot signature. People around the world travel over 15 hours from the Philippines’ capital of Manila up north to Buscalan to get tattooed by her. In 2018, Whang Od received the Dangal ng Haraya Award for Intangible Culture Heritage. She was recognized “as a living vessel of a traditional practice, who deserves honour and acknowledgement for her contributions, particularly by bringing to greater attention the indigenous practise of tattooing and Filipino culture.”  Philippine senators also made a resolution to nominate Whang Od for the National Living Treasure Award, the highest honour given by the state to traditional folk artists.

There are tons of online resources to learn about ACPI identities and cultures. I’d start with some powerful books to help educate both Allies and our ACPI community.

Minor Feelings by Cathy Park Hong. She writes about her experience of “minor feelings” – the cognitive dissonance you feel when the cultural messaging you receive contradicts the lived experience of your identity.

Not Quite Not White by Sharmila Sen. She discusses her story of immigrating from India to the U.S. After her teen years trying to assimilate she was forced to reckon with some hard questions about her identity.

It began with a Page by Kyo Maclear and Julie Morstad. A great read if you’re a parent or teacher struggling to talk with children about how racism targets Asian American communities.

If you’re not a reader, I’d suggest listening to podcasts from ACPI creators that explore the complexity of ACPI identity and culture.

You can also check in and ask your ACPI friends about their experiences growing up. You can learn a lot from those closest to you.