To celebrate, we are featuring Cultures Connected, the Employee Resource Group for ACPI team members at REX, with Q&A about their heritage. Read Melissa’s responses below! 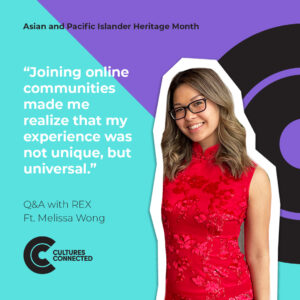 I’m a 2nd generation Chinese Canadian woman (she/her)! My father grew up in Toisan and immigrated to Canada as a young child, and my mother grew up in Laos and immigrated to Canada as a teen. I’m very privileged that I grew up near family on both sides, in Vancouver, B.C., on the unceded territories of the xʷməθkʷəy̓əm (Musqueam), Sḵwx̱wú7mesh (Squamish), and Sel̓íl̓witulh (Tsleil-Waututh) Nations.

I was a bilingual child, spending lots of time with my grandparents practicing speaking, reading, and writing in Chinese – even though I absolutely despised going to Chinese School. What kid wants to go to school on the weekend!?

Today, I love exploring new depths of the rich Chinese culture in addition to other East Asian, South Asian, Southeast Asian, Western Asian, and Pacific Islander cultures. During the pandemic, I’ve started watching Korean dramas and for my birthday this year, my family made some of my favourite traditional Lao dishes!

For a long time, I shied away from my heritage and culture. As many 1st and 2nd generation kids and young adults do, I tried my best to assimilate to my peers and mimic the celebrities in my favourite TV shows – very few of which looked like me. As a result, there were pieces of myself that I would not always share, and pieces that I even disliked.

It wasn’t until university when my network expanded, and I connected with more individuals who had similar experiences and backgrounds. Suddenly, the things in my culture were cool and a way to bond with others. As silly as it sounds, joining online communities like Subtle Asian Traits made me realize that my experience was not unique, but universal. I felt like less of an “other” and gained even more curiosity about my own background.

All of the Chinese traditions that my family celebrates are incredibly sacred to me! The Lunar New Year to start, then Qingming in the spring when we go pay respects to our ancestors, and the Mid-Autumn Moon Festival in the fall! The heart of these modern-day traditions is family coming together.

Growing up, the prevailing Asian role models in my life were my family. I wish we had been taught more about important Asian figures in school or shown them in the media, because that exposure may have shaped some of my self-perception! These are some of the people I personally wish I had known about (not an exhaustive list):

Anna May Wong: She is considered the first Chinese American film star in Hollywood. A trailblazer, Anna May Wong took on typecast roles of the “exotic oriental” during a time of florid racism in Hollywood when it was commonplace for white actors to don yellow face and squinted eyes for Asian roles. In an interview, she said, “I was so tired of the parts I had to play – why is it that the screen Chinese is always the villain?”

Junko Tabei: The first woman to reach the top of Mount Everest in 1975. As a Japanese mountaineer, she formed an all-women climbing club in addition to advocating for sustainable climbing and environmental preservation.

Amy Tan: The author of The Joy Luck Club, a portrait of Asian-American family life that was adapted into a movie in 1993, the last U.S. film to feature an all-Asian cast before Crazy Rich Asians in 2018. For this work, she faced scrutiny, yet she continued to win awards and tell stories in the form of her memoirs. She also wrote Sagwa: the Chinese Siamese Cat which was turned into a PBS animated series.

Lastly, I would love to give a shout-out to a local trailblazer, Bessie Lee. A Chinese Canadian activist and organizer in Vancouver’s Strathcona and Chinatown neighborhoods. She was a co-founder of the SPOTA organization that stopped the construction of a freeway that would have demolished the Strathcona community and collaborated with government to invest $5 million into rehabilitating the area and building a new community center. For her work, she won the BC Community Achievement Award in 2014.

To the non-Asians, there’s a lot you can learn about Asian culture by watching TV! For example, Fresh Off the Boat, Kim’s Convenience, Never Have I Ever, and Crazy Rich Asians. These are all fresh and funny stories that do a great job of conveying the nuances of Asian families and upbringing.

To more seriously self-educate on the history of Asians in Canada, there are tons of resources online. Learn about the head tax, Chinese Exclusion Act, mass anti-Chinese protests, family segregations, and killing that have happened within the last century. Also, the anti-Indian immigration policies, Japanese internment camps in BC, and so much more.

Most importantly, reflect on how you, your family, and your friends may have unknowingly perpetuated harm, and how going forward you can help to protect Asian lives in your community.