To celebrate, we are featuring Cultures Connected, the Employee Resource Group for ACPI team members at REX, with Q&A about their heritage. Read Nicole’s responses below! 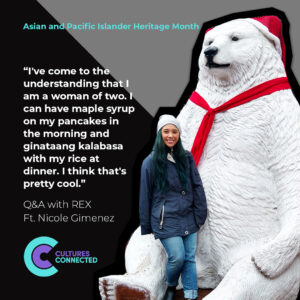 I was born in Manila (Philippines) before moving to Canada when I was a toddler with my family. I grew up in Surrey, a city abundant with visible minorities and I’ve always been proud to have been raised amongst so much cultural diversity, including our own Filipino-canadian community.

I began to embrace my culture in my early to mid 20’s and I think that I am still in that process of really exploring that side of me. For a long time I thought I wasnt filipino enough to say im filipino but I wasn’t really canadian either. I both belonged and felt left out. Now I’ve come to the understanding that I am a woman of two. I can have maple syrup on my pancakes in the morning and Ginataang Kalabasa with my rice at dinner. I think thats pretty cool.

Christmas eve is a day filled with cooking and prepping meals together as a family. Typically I make the Leche Flan (dessert) and my mom and brother make the entrees – usually it’s a combination of pancit (filipino noodles), roasted ham, pasta, mashed potatoes and more. Then at midnight we all gather for the big feast to celebrate Christmas.

Margaret Cho! When I first saw her on Drop Dead Diva ( a meh-TV show from 2009) and then later in her stand-up routines, I was so excited to see an asian woman, covered in arm tattoos that was funny and snarky and loud. She was the opposite of the quiet, well-behaved, small Asian girl stereo type of the time. It was refreshing and as a young, impressionable teenager, it gave me so much encouragement.

Google and Wikipedia. If you are interested in your cultural heritage, then I would encourage you to read up on the history of where your family comes from. It’s super insightful.